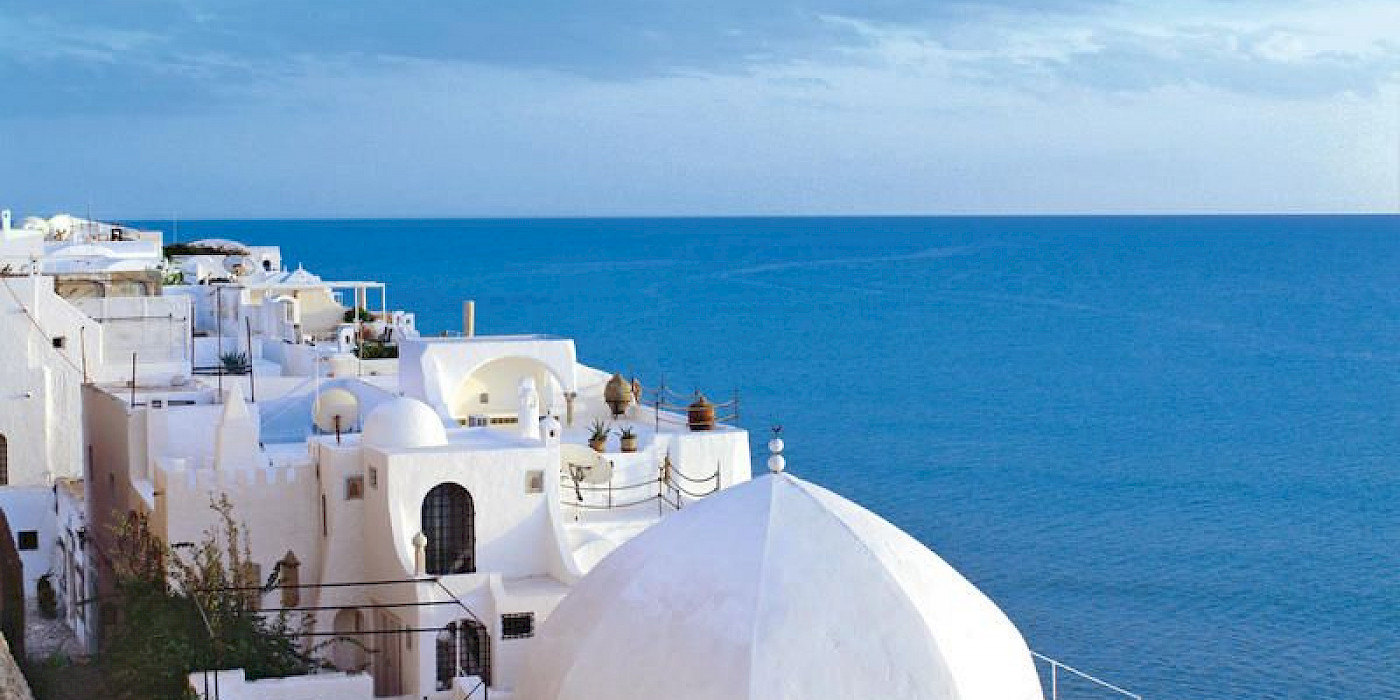 The Republic of Tunisia has a remarkable position in North Africa: the north and northeast of this Arab state surrounds about 1,300 kilometers of coastline in the Mediterranean, while it borders Algeria to the west and Libya to the southeast. About 40 percent of the southern and southwestern territory of the country is covered by the Sahara Desert, while the remaining 60 percent of the country's surface is very fertile and suitable for agriculture. The mountain range, which is part of the Eastern Atlas, intersects the country diagonally and sharply separates the desert from the Mediterranean climate. The capital is also called Tunisia, as well as the nearby lake and the large bay in which the capital is located. It is said that the name Tunisia comes from the Berber word "to spend the night". Tunisia has over 10 million inhabitants. Tunisians speak Arabic, but they are also fluent in French, English, German, Italian and Russian.

After a turbulent history marked by various conquerors, Tunisia became an independent state in the middle of the last century, and in 1957 the Republic of Tunisia was proclaimed with Habib Bourguiba as president, who remained at the helm for thirty years. He was replaced by the former president of Zina El-Abidine, Ben Ali, and after the riots in 2011, Mohamed Monsef Marzuki became the third president of independent Tunisia. Tunisia has a rich history of thousands of years

From there in Tunisia you can see fantastic historical monuments such as the remains of ancient Carthage, the Roman amphitheater in El Jem and the National Museum in Bardo with the largest collection of Roman mosaics, then the exceptional urban architecture in Sidi Bou Said Arabic-Andalusian style, unusual barber houses buried in desert sandstone, or you can taste French baguettes, croissants and cheeses and Italian pasta while listening to Italian canzones ... Of course, there are also exceptional Muslim religious buildings and cultural monuments, some of which are unique on African soil.

RELIGION: Islam (practiced by 98% of the population)

The main Tunisian gastronomic specialties come from the traditional cuisine of the Berbers, the oldest settlers on this soil originating from the Biscay East. The Spaniards introduced the use of olives, olive oil, walnuts and fruit, while French cuisine has also left a significant mark, and in many restaurants you can find two menus: one with French and the other with Tunisian specialties.

You can plan a fantastic summer with our offer for Tunisia Starting from June 10, 2022, then on charters twice a week from Belgrade, and with the possibility of connecting flights from Podgorica, you can choose one of the great hotels (4 * and 5 *)

Almost all hotels are all inclusive (breakfast, lunch, dinner plus additional services depending on the hotel).

Most of them are on the beaches, and contain everything you need that you will not want to leave the hotel complex.

There are options for 7 and 10 nights.

During your stay in Tunisia, our local partners will offer you a large number of excursions and tours such as Jeep safari, etc ...

You can see the complete offer on the website of the organizing agency www.sunline.rs, whose representatives we are for Montenegro, and for help in choosing a hotel, all detailed information and reservations, you can contact us.

Some of the hotels we have had phenomenal experiences with